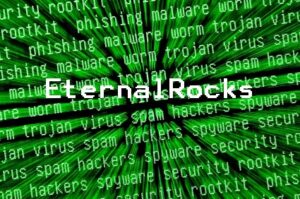 A new worm, EternalRocks that exploits Windows SMB (Server Message Block) vulnerabilities has been discovered by a security researcher. EternalRocks uses seven SMB-specific NSA tools, while WannaCry used only two. It is a much scarier worm because it does not have any weaknesses, including the kill switch used to contain WannaCry.

EternalRocks does not alert the users they have been infected, it remains silent on their computers. Once it is on a computer, it downloads Tor’s web browser and sends a signal to a C&C (command & control) server on the Dark Web. EternalRocks uses a 24-hour activation delay upon which the C&C server responds and starts downloading 7 SMB exploits and self-replicating. EternalRocks then scans the internet for open SMB ports and spreads to other organizations. Due to its stealthy nature, it is unknown how many computers are infected with EternalRocks, and it has not been weaponized yet.

EternalRocks leaves infected computers vulnerable to remote commands that could weaponize the infection at any time including banking Trojans or Remote Access Trojans.  Even if the SMB patches are retroactively applied to machines already affected by EternalRocks worm, they are remotely accessible via DOUBLEPULSAR backdoor Trojan.

Microsoft has patched the SMB vulnerabilities in March 2017, as part of the MS17-010, but many computers still remain unpatched allowing EternalRocks to exploit them.

What can you do

To continuously protect your organization, ensure your Operating Systems (OS) are up to date by regularly applying the most recent patches recommended by the OS vendor, have an up to date antivirus software installed on your systems, and finally, have a program in place that can scan email attachments and files downloaded from the Internet. Your web filter should also analyzed to ensure additional malicious websites are blocked.[/vc_column_text][/vc_column][/vc_row][/vc_section]

Prev PostWhat is WannaCry, WannaCrypt, WanaCrypt0r 2.0, Wanna Decryptor and how to Protect Yourself from Ransomware
Next PostWhat is 23 NYCRR 500?

You can find out more about which cookies we are using or switch them off in settings.

This website uses cookies so that we can provide you with the best user experience possible. Cookie information is stored in your browser and performs functions such as recognising you when you return to our website and helping our team to understand which sections of the website you find most interesting and useful.

Strictly Necessary Cookie should be enabled at all times so that we can save your preferences for cookie settings.

If you disable this cookie, we will not be able to save your preferences. This means that every time you visit this website you will need to enable or disable cookies again.